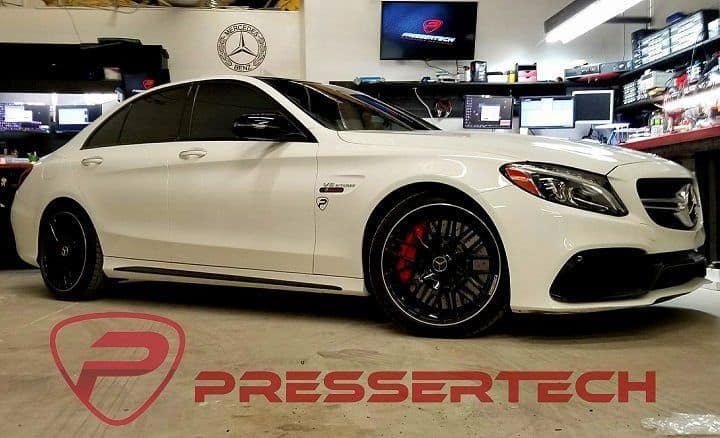 Mercedes C63s AMG: As we look towards the Christmas holiday, we’re thankful for time with our family and friends. We’re also thankful for the opportunity to get to do the work that we’re passionate about… Performance tuning Mercedes, Audi and BMW vehicles. We recently got to tune a 2018 Mercedes Benz C63s AMG. It’s a car that was once described as “an iron fist in an iron glove, it’s just brutal.” Not only did we see this brutal power with the Stage 1 Tune, we saw the staggering upgrade with the Stage 2 Tune.

For a bit of trivia, AMG stands for the names of the founders and the town where they first set up shop: Aufrecht Melcher Großapach. AMG is celebrating its 50th anniversary this year. It’s also their 18th year as a Mercedes Benz subsidiary. Their mission is to elevate the performance of Mercedes vehicles, and we’re always excited to take that mindset a step further.

The Mercedes C63s AMG has M177 4.0-liter V8 biturbo engine, similar to the AMG GT sports car. It jumps off the line, charging from 0 to 60 in 4.0 seconds. At stock, this car performs at 503 horsepower and 516 LBS-FT torque. We couldn’t wait to see what kind of power could be unlocked for this car when we gave it a Stage 1 tune and then a Stage 2 Tune.

In fact, when our expert technicians’ tune, they target a critical piece of technology under the car’s hood. That’s the engine control unit or ECU. Tuning is a complex process and the ECU needs to be handled with care. When we removed the Mercedes C63s ECU, we used our in-house technology to modify its settings, unlocking this vehicle’s potential. Watch Todd at work on this C63 S in this YouTube video.

Of course, that’s one of the reasons we love Mercedes is that we can do a Stage 2 Tune without having to replace any stock components and still be able to pull off some crazy performance numbers. This is because Mercedes already uses such great components and their cooling systems are on point. We have a really solid foundation to work from.

Moreover, when we tune a Mercedes, we see better throttle response, increased efficiency through all loads and gains all around. For this Mercedes C63s, this included a boost of 97 more horsepower and 144 more LBS-FT torque. That’s a 19% increase in horsepower and a 27% increase in torque. It’s incredible to see what kind of performance upgrade can be achieved simply through tweaks to a car’s ECU, without making other expensive aftermarket upgrades.

Give Us A Call 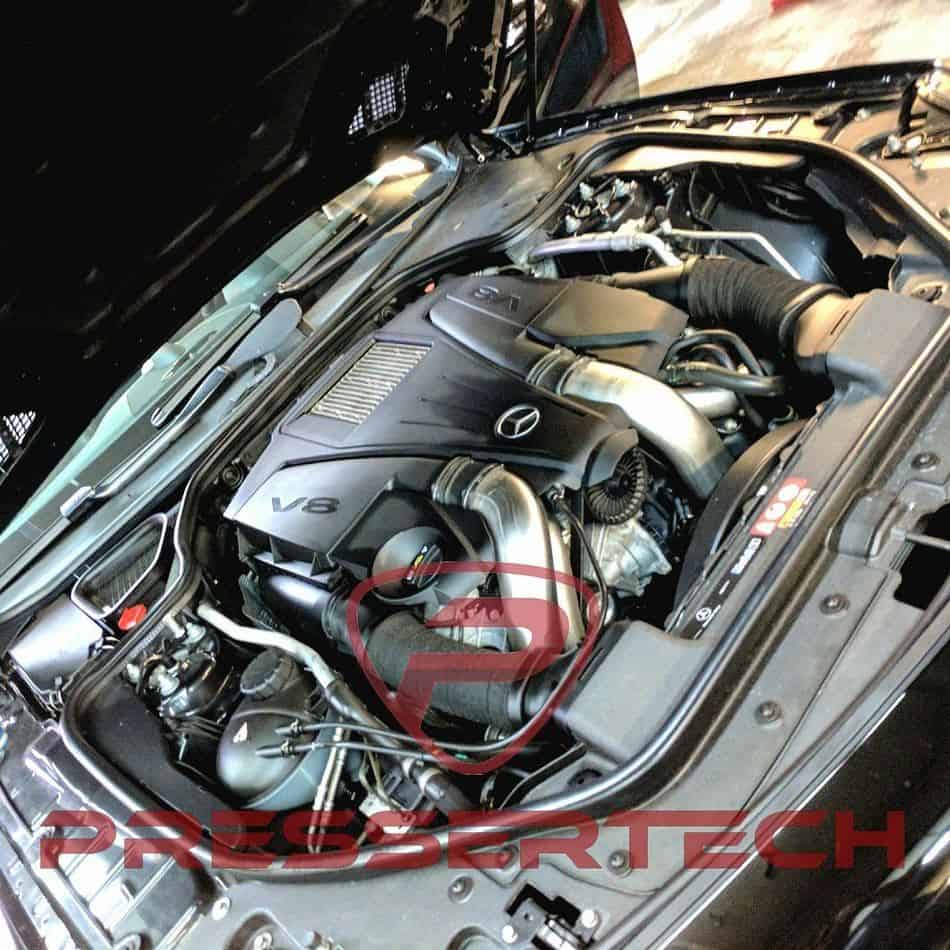 A little backstory first. The M278 (and its variants the M157 and the M152) is a direct injected, twin-turbocharged, V8 gasoline piston engine.

Its predecessor is the M273 V8, and it still shares its bore pitch, aluminium engine block, and Silitec aluminium/silicon low friction cylinder lines. Where it differs is the gasoline direct injection, as opposed to port injection. The M278 boasts more precise fuel delivery and multi-spark ignition for more efficient combustion. The M278 features twin turbochargers.

What all this boils down to is 22% lower fuel consumption than its predecessor, while still producing more power and more torque. You can begin to see why we’re so sweet on the M278.

This engine can be found under the hood on more recent S, CL, CLS, SL, E and GL classes. The M157 variant is tuned by Mercedes AMG and is used in higher performance models like the S63, CL63 and the CLS 63 AMG. You’ll find the M152 under the hood of the SLK55 AMG.

Equally Important, we love this engine because of the results we’ve seen from Stage 1 and Stage 2 tunes here in our shop. In one case we upgraded a 2014 E550, which started with stock specs of 402 horsepower and 443 LBS-FT torque. A Stage 1 tune brought a whopping 26% increase in horsepower and a 33% increase torque.

You can take a look at more examples we’ve written about on our blog. This includes a 2014 SL550, a 2012 S550 and a very special SL65. We hope you can see that we can really get a lot of power with a performance upgrade on an M278 engine. Especially with a Stage 2 tune.

As a matter of fact, when we tune a Mercedes, we see better throttle response. Increased efficiency through all loads and gains all around. In addition, by modifying the engine control unit, or ECU, we can unlock the hidden potential in your vehicle. Better still, without compromising your stock components. We encourage you to read through our Ultimate Tuning Guide to learn more about what tuning can do for your car. You can also learn about our other offerings including replacement of defective or damaged ECUs.

We’re Here For You 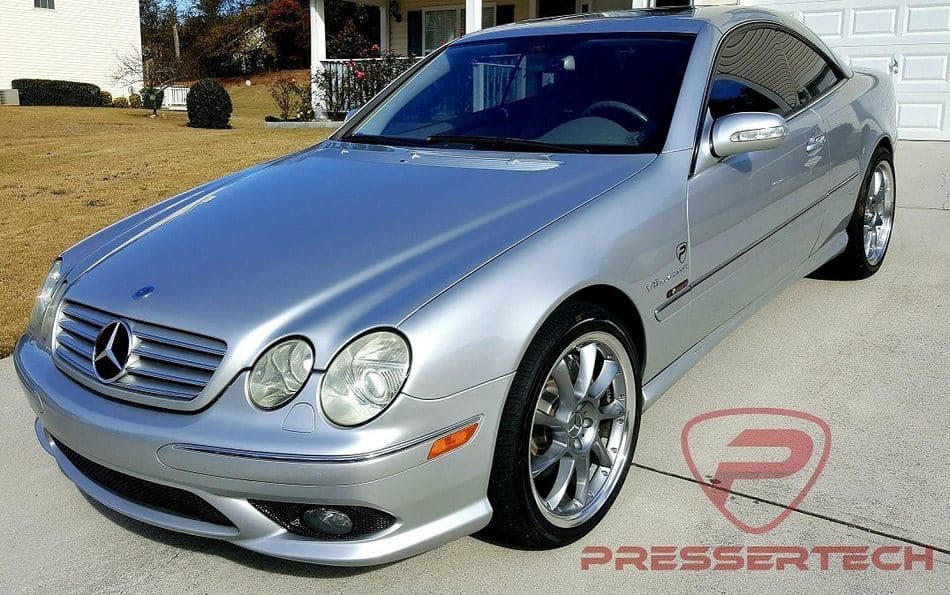 When we opened this shop we had one thing on our mind — all of the possibilities for Mercedes Tuning. The Mercedes CL55 AMG and specifically V8 Kompressor engines. Out of that passion came PRESSERtech, and many Mercedes V8 Kompressor Engines later we are proud to say we’ve expanded to working on the engines of other European makes and models, like BMW. But today, we’re going back to our roots to work on that V8 Kompressor engine. One that is near and dear to our hearts, is in a 2005 CL55 AMG with a W215 chassis. The name for the V8 Kompressor Engine is a marketing name by Mercedes-Benz used in Supercharged Engines.

“Think Arnold Schwarzenegger in an Armani tuxedo.” That’s how MotorTrend described the Mercedes CL55 AMG in 2003. It’s certainly “a confident head-turner, with a hint of the formidable muscle underneath the beautiful tailoring.” At stock, its 5.5 liter V8 Kompressor engine outputs 493 horsepower and 518 LBS-FT torque. As you may know, the CL-Class is a derivative of the S-Class and is comprised of a line of full-size luxury grand tourers. The CL stands for Coupe-Light or Coupe-Luxury.

This particular Mercedes CL55 AMG is a 12-year-old car. Rather than let it feel its age, we made big plans to enhance its engine. (You can watch our progress on our YouTube channel.)

When we talk about Mercedes tuning options with our clients, we speak in terms of stages. The anticipated results of a Stage 1 tune was 530 horsepower and 565 LBS-FT torque. A Stage 2 tune would bring the vehicle’s performance up to 535 horsepower and 605 LBS-FT torque. While this CL55 would see gains all around, we were most excited about what we’d be able to do for the upgrade in torque.

With a Stage 2 tune in our sights, we got to work in the PRESSERtech garage. When our expert technician’s tune, they target a small, but important piece of technology under the car’s hood. The engine control unit or ECU. If you’ve read some of our other blog posts or watched some of our other videos, you know that this process is complex and the ECU needs to be handled with care. We remove the ECU and use our in-house technology to modify its settings. In this case, breaking a 12-year-old Mercedes CL55 AMG from its factory specs. We’d soon be able to see what this car could really do.

You can see and hear the 2005 CL55 breathing freely now after its Stage 2 tune. We saw gains all around, including an increase of 42 more horsepower and 87 more LBS-FT of torque. That’s a 16% increase in torque for this Mercedes Benz, and we couldn’t be happier to share these results with our client. 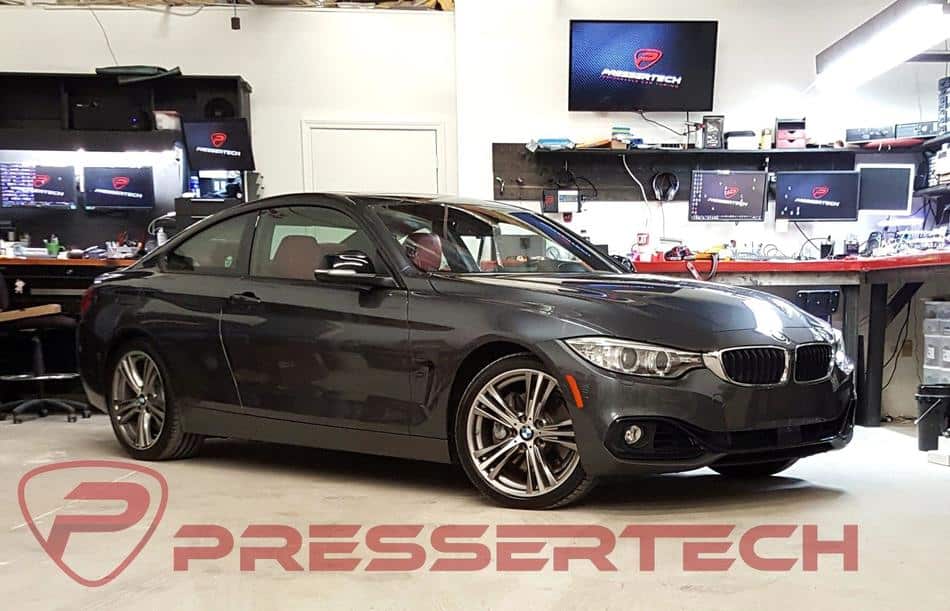 We’re excited to begin a new chapter at PRESSERtech, so we introduce BMW tuning to our offerings. We’re looking forward to welcoming BMW drivers to our garage, alongside our Mercedes Benz customers to have there very own BMW Tune. To kick it off, we had a blast tuning a 2014 BMW 435i. What better way to get started on a BMW Tune?

We love the BMW 435i for its N55 engine — a turbocharged direct injection straight-6 dual overhead camshaft (DHOC). In particular, it features a single twin scroll turbo and BMW’s proprietary Valvetronic variable valve lift. The technology makes for one solid engine under the hood, and exciting possibilities for performance tuning and specifically a BMW Tune.

The F32 coupe was revealed in September 2013 at the Frankfurt Motor Show. This 2014 model helped usher in the BMW 4-Series, a range of entry-level luxury cars for BMW. At stock, the BMW 435i performs at 302 horsepower and 295 LBS/FT torque.

It’s certainly a gorgeous car and “a rollicking good time,” as AutoWeek once described it, but the BMW 435i is lagging in power. The good thing is that’s exactly what we’re here for — to help BMW tune this BMW 4-Series and get it performing to its fullest potential.

Like we’ve done for many a Mercedes Benz, we can help bring the power out of this BMW. A Stage 1 BMW tune would boost this bimmer to 375 horsepower and 308 LBS/FT torque. Our client ultimately decided on a Stage 2 BMW tune, which would power up performance to 400 horsepower and 405 LBS/FT torque.

As you’ll see in our Ultimate Tuning Guide, by BMW Tuning your vehicle, we can help your engine perform better and more efficiently. It’s not all just about horsepower and torque. By helping the power come in faster, at a lower RPM, we can also help decrease your vehicle’s fuel consumption.

The key is your BMW’s ECU, which oftentimes holds your engine’s power captive. A performance upgrade can safely breathe new life into your vehicle.

Our CTO Todd Presser tested out the 435i after its tune and experienced some striking differences. Overall responsiveness was much quicker, and the lag was almost nonexistent. After the BMW performance tune, we saw a 32% increase in horsepower and a 37% increase in torque. These results, based on a software upgrade, are just staggering.

You’ll see on our YouTube channel that Todd may be having a little too much fun testing out the results. But who can blame him? (Please don’t get a speeding ticket, Todd!)

If you’re thinking about a performance tune, give us a call at (770) 648-0500 or use our Contact Form. You can also learn about some of our other offerings including replacement of defective or damaged ECUs, as well as a permanent fix for faulty electronic steering locks.

We’re happy to chat with you about what we can do for your Mercedes or BMW!